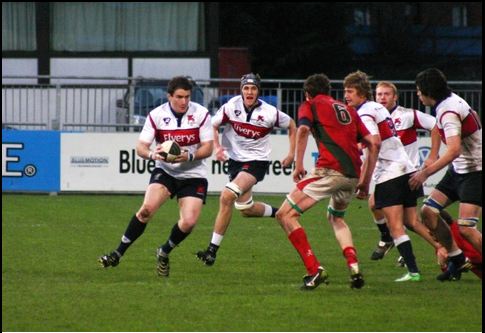 On a dry windy day with the strong breeze blowing across the pitch towards the Dodder, bottom of the table, Clonakilty kicked off towards the Wesley end of the ground.

Following a scrum near the Clonakilty 22, that was won by Wesley, the ball was fed inside by out half Dan van Zyl to Richie Murphy who took it forward before feeding Ian McGann who crossed for the opening try on 8 minutes which Barry McLaughlin converted to give Wesley a 7 – nil lead.  For the next 15 minutes neither side dominated in the exchanges however on 23 minutes Clonakilty were awarded a penalty just outside the Wesley 22, in front of the posts.  This was converted by the Clonakilty no 10, Matt Kirby, having previously missed a penalty from a similar distance.  Old Wesley 7 – Clonakilty 3.

After some play just inside the Wesley half a loose ball was gathered by Izak Muller, on the half way line.  The Wesley scrum half made a diagonal break and fed the ball to Dan van Zyl who out sprinted the Clonakilty defence to score near the touchline. The difficult conversion kick was added by Mclaughlin to stretch the Wesley lead to 14 – 3. This was however the last action by the veteran out half van Zyl who went off with a muscle injury.  Wesley brought on Ian Cassidy at scrum half and rearranged their back line with Muller moving to full back and Rory Stynes replacing van Zyl at out half.

With the game going into injury time of the first half and the Wesley pack getting the upper hand in the exchanges Clonakilty were penalised for not releasing the ball on their 22.  The resulting kick by McLaughlin was successful to give Wesley a 17 – 3 half time lead.

Old Wesley commenced the second half with John Carroll coming on in the back row for Ivan Campbell.  The half was barely 4 minutes old when Clonakilty were awarded a penalty 30 metres out in front of the posts but the resulting kick was left and wide. Both sides were attempting to open up the game and a kick ahead by Clonakilty was collected by Ian Cassidy on his 22.  He quickly saw an opening down the left and as he was tackled passed to Ross Barbour on the wing and with the Clonakilty defence closing he found John Carroll steaming up on his inside for the big forward to score Wesley’s third try 5 metres in from the corner flag.  The difficult conversion was missed by McLaughlin to bring the score to Old Wesley 22 – Clonakilty 3.

On 15 minutes Wesley were awarded a penalty just inside the Clonakilty half which was kicked to the left hand corner. From the resulting line out Wesley won the ball and took it into a maul and then over the Clonakilty line for Tristan Goodbody to score Wesley’s fourth try to secure the bonus point.  The conversion was missed to make the score Old Wesley 27 – Clonakilty 3.  Clonakilty were awarded a penalty midway into the Wesley 22 in front of the posts.  Replacement out half Mark Purcell took it quickly to catch Wesley napping and scored under the posts which he easily converted to bring the score to Old Wesley 27 – Clonakilty 10.

With the game now going into the final ten minutes Wesley started to empty their bench with Michael Stack and Simon Goldsmith coming on for Hosie and Henshaw.  The best move of the match came when Wesley won the ball off the top at a lineout on the half way line.  The ball was fed quickly to the backline and with good ground made by Stephen Harvey and Tristan Goodbody it was fed to Matt Crockett to score Wesley’s fifth try.  The conversion 6 metres in from touch by McLaughlin brought the score to 34 -10 for the home side.

The last substitute brought on was Gavin Telford for Matt Crockett.  Old Wesley were soon on the scoreboard again when Clonakilty won the ball from their scrum.  As the ball was fed across their backline a pass was intercepted by Stephen Harvey who raced in to score under the posts.  The easy conversion by McLaughlin brought the score to 41 – 10. The final score came just before the full time whistle when, from a scrum, Old Wesley moved the ball quickly through the backs for Barry McLaughlin to score under the posts. He easily converted to make the final score Old Wesley 48 – Clonakilty 10.

This was a fine team performance and the 5 point bonus win promotes Old Wesley to second place in the league on 21 points just 2 points behind leaders DLSP.