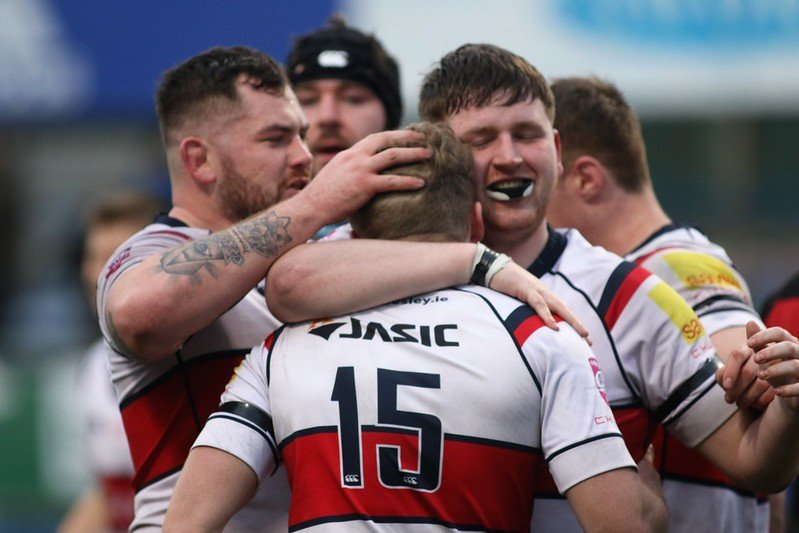 After a five-week gap Old Wesley returned to AIL rugby with a return fixture against City of Armagh at Donnybrook.  Prior to kick-off both teams and spectators observed a minute’s silence in memory of Paddy Bewley, a Life Member of Old Wesley, Paddy Horan, father of Old Wesley coach and former Captain, Darren Horan, and Ashling Murphy, who died in tragic circumstances during the week.

The match started in lively fashion with both sides looking to run the ball and create attacking moves. Ten minutes in Old Wesley were starting to show a little dominance but when the opposition kicked ahead a loose ball they looked to be heading for a try.  The try was stopped short of the line but it led to a penalty under the posts.  Armagh’s Kyle Faloon stepped and had no difficulty in kicking the first 3 points of the match.  Wesley responded quickly.  From a line out on the opposition 22 they mauled and carried the ball to the goal line where Cronan Gleeson, with the help of the pack, bundled over for the first try of the match.  Ian Cassidy converted for a 7-3 lead.

Moments after the restart a wonderful break by Alex Molloy had play back up to the Armagh 22.  Quick recycled ball and a neat cross kick found Tommy O’Callaghan.  Taking the catch at pace he out-sprinted two defenders to touch down in the corner.  Wesley continued to call the shots and paid a couple more visits to the Armagh 22, however it didn’t affect the scoreboard.  The Ulster side eventually got into the game following a couple of penalties conceded by Wesley.  One of the penalties also meant a yellow card for Ben Burns for a deliberate knock on.  This spurred on Armagh and when they kicked a penalty to find touch 5 metres out a try looked on the cards, especially with the extra man.  The Wesley defence looked as if they had done just about enough to hold the line but the pressure eventually told and Neil Faloon got over for a try.  A few minutes later a kick ahead had the Wesley defence in desperate straits once again, with David Poff saving the day with a kick to touch near the line.  Still with the extra man the impetus was still with Armagh.  But when a maul was held up Wesley earned a scrum and kicked to touch for half time. Score 12-8 to Old Wesley.

Two minutes into the second half there was another yellow card for a deliberate knock-on.  But this time it was against Armagh with Kyle Faloon having to temporarily leave the pitch.  Now back to 15 and after a powerful carry by Ben Burns the ball was passed out the back line where Molloy took a neat pass and crossed unopposed to score under the posts. Cassidy again converted for a 19-8 lead.

Armagh tried their best to respond but a knock on denied them any form of a score. Wesley then flirted with the goal line kicking a couple of penalties to touch inside the 22 but neither led to a score.  As the hour mark approached Armagh were doing their utmost to put together some attacking moves until an intercept pass was picked up by O’Callaghan.  Urged on by his team mates and spectators he sprinted over 60 metres, and crossed the line untouched to claim the bonus point try.  Cassidy converted making it 26-8

There was no way back for the visitors and with Wesley now playing with huge confidence another try or two looked imminent.  And there should have been more with Armagh rarely getting back into the Wesley half for the remainder of the game.  Four times in the last 15 minutes Wesley kicked penalties to touch within 8 metres of the opposition line.  But on each occasion a knock on or loss of possession cost them a score.  And there it remained with no more scored until full time.

This was a well-engineered win and bodes very well for the remaining matches in the league. The win promotes Old Wesley to top of Division 1B, 3 points clear of Highfield, with the latter only managing a draw in their fixture.  Happy days in an otherwise gloomy times.

Link to table and fixtures: